For many people passing through Italy, they make sure Florence is a stop.  By the end of most people’s trips they claim Florence to be there favorite, but they still have no idea what to do while they are here.  In the simplest, and most beneficial way we’ve been able to break down Florence’s highlights in 2 days for you!

Let’s start at the Duomo!  Everyone wants to see this beautifully constructed piece of

architecture.  Take some pictures, and don’t forget to look behind you at the St. John’s baptistery.  Take careful notice of the golden doors that tell stories from verses in the bible.  Feel like climbing to the top?  Go for it.  The views are spectacular.  However, sometimes the line is too long, and seeing as we really only have two days here, let’s not waste too much time, instead of climbing to the top of the Duomo, climb the bell tower adjacent.  It’s the same height, with the same great views, and half the line!

After finishing at the Duomo, head down to the main street, Via Roma.  You will pass Piazza Della Repubblica.  Take a few pictures here as well.  It really is a gorgeous scene; try to hop on the carrousel for the fun of it.  Continue down this street to get to the famous, Ponte Vecchio (Old Bridge).  It’s one of Florence’s famous spots, and always crowded.  Just be patient and enjoy what’s around you, and where you are at the moment.  It really is remarkable that this one bridge still stands even after all the wars, bombings, and everything Italy has gone through.  Look up higher above all the shops and notice the little windows; there is where royalty used to walk.  They were above peasants, and during WWII, it’s how the Italians fired against enemies, they were able to use this ‘secret walkway’ to attack enemies when they crossed the Ponte Vecchio.

After admiring the historical bridge continue straight and head towards the Pitti Palace.  Grab a scoop of gelato on the way too.  Just make sure you look for the right kind.  The rule of thumb is the higher the gelato, and the more you see of it, the worse it is.  The best kind is not fluffy, and usually is hidden in the silver canisters.  Once you hit the Pitti Palace, you can continue down the same street you will eventually run into the Boboli Gardens which are beautiful even without it being in the ‘bloom’ season.  But if you’re feeling hungry, take a right down the street right in

front of the Pitti Palace, Sdrucciolo de’ Pitti Via Maggio is the next crossing street and on the left corner there’s Gusta Pizza.  One of, of not the, best pizza place around, and very cheap as well.

Head back to the Ponte Vecchio next.  Don’t cross it just yet, instead, turn right and head down that main street along the river.  Grab a bottle of vino on your way.  You will soon come to a huge half bridge medieval structure.  Turn right to hike up the hill behind it.  You’re about to climb to the top to Piazza Michelangelo.  Make sure you make it all the way to the top to see a fake David, but also the best view of Firenze.  Now it’s time to take your time.  Sip your wine, watch the sunset, and have a great conversation with friends around you. 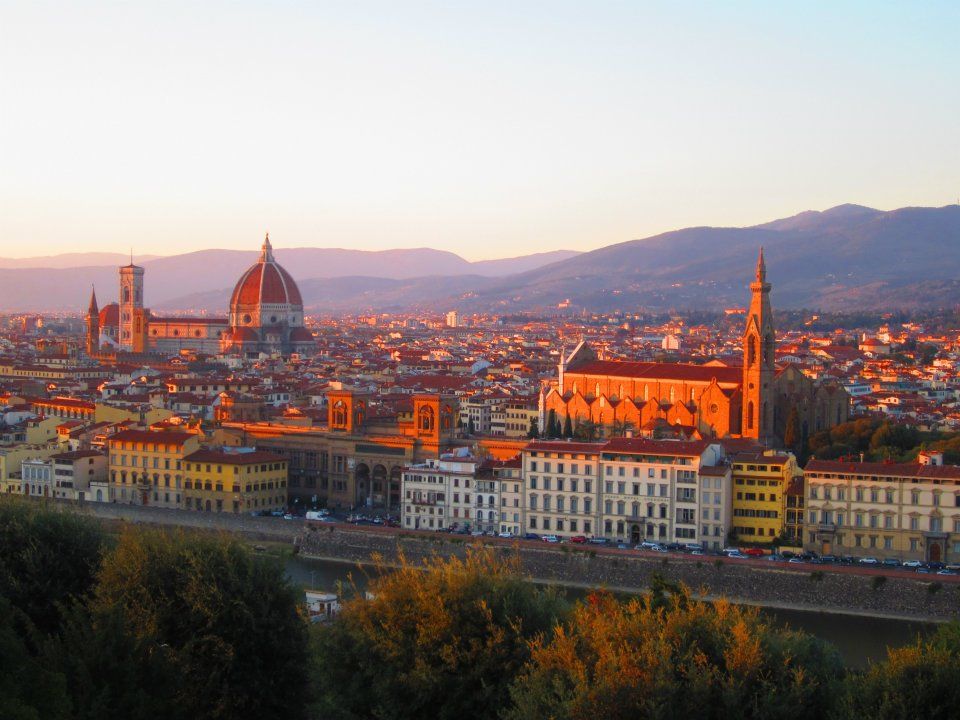 The sun has set, and on your hike back down might get you a little hungry.  Instead of having another filling meal, continue down the next bridge you see after Piazza Michelangelo, Ponte alle Grazie.  It leads to Via dei’Benci.  A lot of student bars are on this street, so if you’re in the mood, don’t be shy to hit one of these up.  For now, just make a stop at the first one on the block, Moyo.  It’s a great apperativo bar.  In Italy, this is the time you take to enjoy a few appetizers and a nice beverage.  Buy one drink, and you get to enjoy the ‘all you can eat’ Italian style buffet.  Bellissimo.

You’re next, and last day in Firenze will be another busy one.  Make sure to stop at a

great cafè, get a cappuccino, espresso, something to get you going!  You’ve seen so many ‘fake’ David’s, now it’s time to see the real one.  From the Duomo find Via Ricasoli, it is close to the entrance to climb to the top.  You are going to take that street all the way down.  Via Guelfa is the next main road you will hit.  Just pass that on the right is the Academia where the David is kept.  After being on display most of his life in the light of the city for all to see, David has moved into a safer environment in the Academia where the weather, vandalism, and anything else can no longer harm him.  Take you time admiring this beauty and a few other pieces Michelangelo created.

Once finished at the Academia, your Italian stomachs will be telling you it’s time to eat again.  Guess it’s time to hit up a great Panini place.  The Oil Shoppe has a wide selection to choose from with low prices.  To get here head to back to the Duomo, and head to the back towards the dome where you will hit via dell’Oriuolo.  Follow this street till it V’s with another street, and the street in front of you is called Borgo Piniti.  Follow that V to the other side, basically taking a wide left.  The Oil Shoppe is on your right.  It’s a small place with an awning coming out covering the sidewalk.  Just be careful, this place is only open till 3pm, or when they run out of bread!  So don’t gawk at David for too long.

Once your stomachs are satisfied, head the opposite direction of the Duomo the first main street will be called Via Giuseppe Verdi.  Turn left down there and head to Santa Croce.  A beautiful church-where Michelangelo is buried.  The Jewish architect who funded and finished building the church once the city ran out of money for the project represents the big blue Star of David.  Head to the left of the church and go behind to a sign that reads “Leather School”.  This is where people learn to make and actually make leather.  It is a great spot to shop for leather.  The best part is that the prices are right, and they even engrave for free as well.  Belts, wallets, bracelets, purses, jackets, you name it!

After here, walk in front of the church and go pass till you hit the next street, Corso dei Tintori.  Take it till it turns into Via dei Neri.  This street will lead you to another piazza, Piazza della Signora.  Another ‘fake’ David lives here, as well as the mayor of Florence’s office, an open sculpture museum, and the Uffizi.  Feel free to take a few laps around this museum as well, another famous one.

Next walk along the river to the Ponte Vecchio, and cross it once more because it is that marvelous.  Head back to the Pitti Palace.  Take a right down Sdrucciolo de’ Pitti and take your first right, Via Toscanella.  You will hit a small square.  On your left is your place for dinner tonight, 4 Leoni.  And on your right is one of the best, hidden gelato places around.  So enjoy the Florentine steak and pear ravioli tonight for dinner, and a nice small scoop of gelato for your walk home after your wonderful meal.

Two days in Florence never seemed possible until now did it?

What to look for in medicines online? Typically the drugs you searched for can more than one listing. Many listings, which are compiled by generic name indicate a medicine is accessible in more than one dose or in various forms, such as liquid. You can purchase physic to treat chronic treatment of the signs of osteoarthritis or lower back hurt. Viagra which is used to treat impotence and similar states when erection is of low quality. Viagra is a remedy used to treat few upsets. What do you already know about cheap cialis 20mg online? What is the most great data you must discuss with you physician about ? Other question we should is . Presently more than quoter of men aged 40 to 70 reported some degree of erectile difficulties. Certain far-famed medications can mean screwing with your sex drive. Commonly the treatment options may turn on sexual dysfunction drugs or hormone treatments. Do not use any treatment without telling your physician if you going to get pregnant during treatment.