The glorious Amalfi Coast is a place that welcomes tourists from all over the world to explore its colorful villas in Positano, taste Limoncello on the island of Capri, and stroll through the lively streets of Sorrento. While people travel here to enjoy all the treasures the coast has to offer, they often know little about the history of Amalfi. We are here to enlighten you and provide you with a few interesting facts so that next time you go to the Amalfi Coast, you can truly appreciate this land and why it is the way it is. Here are some brief facts about the coast with the most, and if anything inspires you to travel with Bus2alps as a student, take a look at our Student Study Abroad Trips in Europe and please get in touch if you have any questions.

The Almalfi Coast’s Ties to Mythology

The Amalfi Coast is a Historical Land

4. Ancient watchtowers are sprinkled along the coast that not only add character to the land but served a purpose long ago. These towers are Saracen forts, used to defend against the Saracen pirates from North Africa. These pirates would raid the small villages in the area. The 30 forts were there to warn the locals that the pirates were coming, doing so by lighting a fire atop the towers to gauge attention from other villages. This allotted some time for the villagers to take their valuables and head inland. Cool right?

5. The port towns are known as ‘Marina Grande’ and ships used to have to pass through the ancient Greek gate to get to it. Amalfi was credited with saving the towns from pirate raids from Turkey and Africa, that’s when they would light up the watchtowers to warn the neighboring towns. Some of the locals down at the ports commonly say to their children: “behave or the Turks will take you away” referring to the pirates that used to raid the towns.

6. The road to get to the Amalfi Coast towns is around 750 years old and it took 150 years to build to Sorrento down from Solerno.

7. Positano has many buildings with shallow rooftop domes that are filled with sand, provide insulation, keeping buildings cool in the Summer warm in the Winter.

8. Positano is filled with pleasant art galleries and cafes up and down the crevice of the coast.

The Town of Amalfi

9. After Rome fell, the town of Amalfi emerged as an independent Republic. This port town competed with Genoa and Venice in a trading fleet that controlled the region. Amalfi established the rules of Sea, they even minted their own coins! However, in 1343, the coast was devastated by a tsunami and shortly after was hit with a tragic plague, not the best year for the coast.

10. The old shipyards in Amalfi are now home to tourist shops. The Cathedral in Amalfi is equipped with a 13th-century crucifix and a bronze door that dates back to over 1000 years ago brought from Constantinople. St. Andrew was buried in this cathedral, many tourists come to visit the tomb.

11. 500 years before Christ, Amalfi was called Magnagrecia, Paestum, founded by Greeks in 6th century BC, and was left deserted for 1000 years. 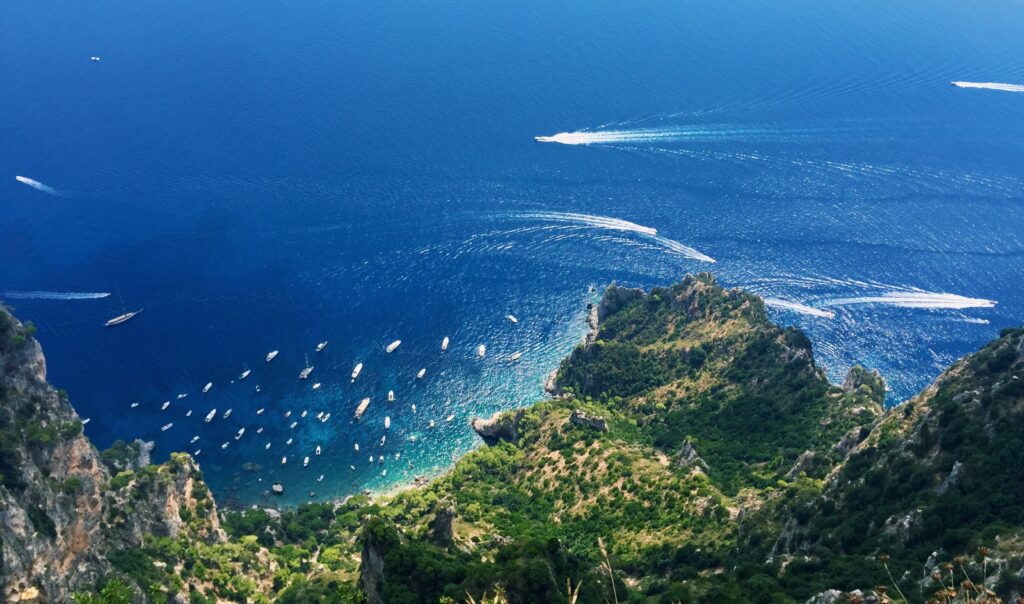 12. Capri was a vacation hideaway for Roman emperors. They loved The Blue Grotto because it was a peaceful bathing spot as well as a private area to take lovers. The Blue Grotto is essentially a 60-yard long cave with a limestone bottom giving the grotto the famous iridescent blue color.

14. Capri is home to the San Michele church where the entire floor is tiled with an Adam and Eve scene. The animals, painted with human features, are ignorant of this momentous event of Eve running away from the apple tree.

Amalfi is known as the ‘Coast with the most’ because of the beauty it has to offer as well as the treasures that come along with it! Well, folks, I hope you learned at least one thing today. The Amalfi Coast is quite the treasure, and it is extremely important to know how this marvelous land came about.