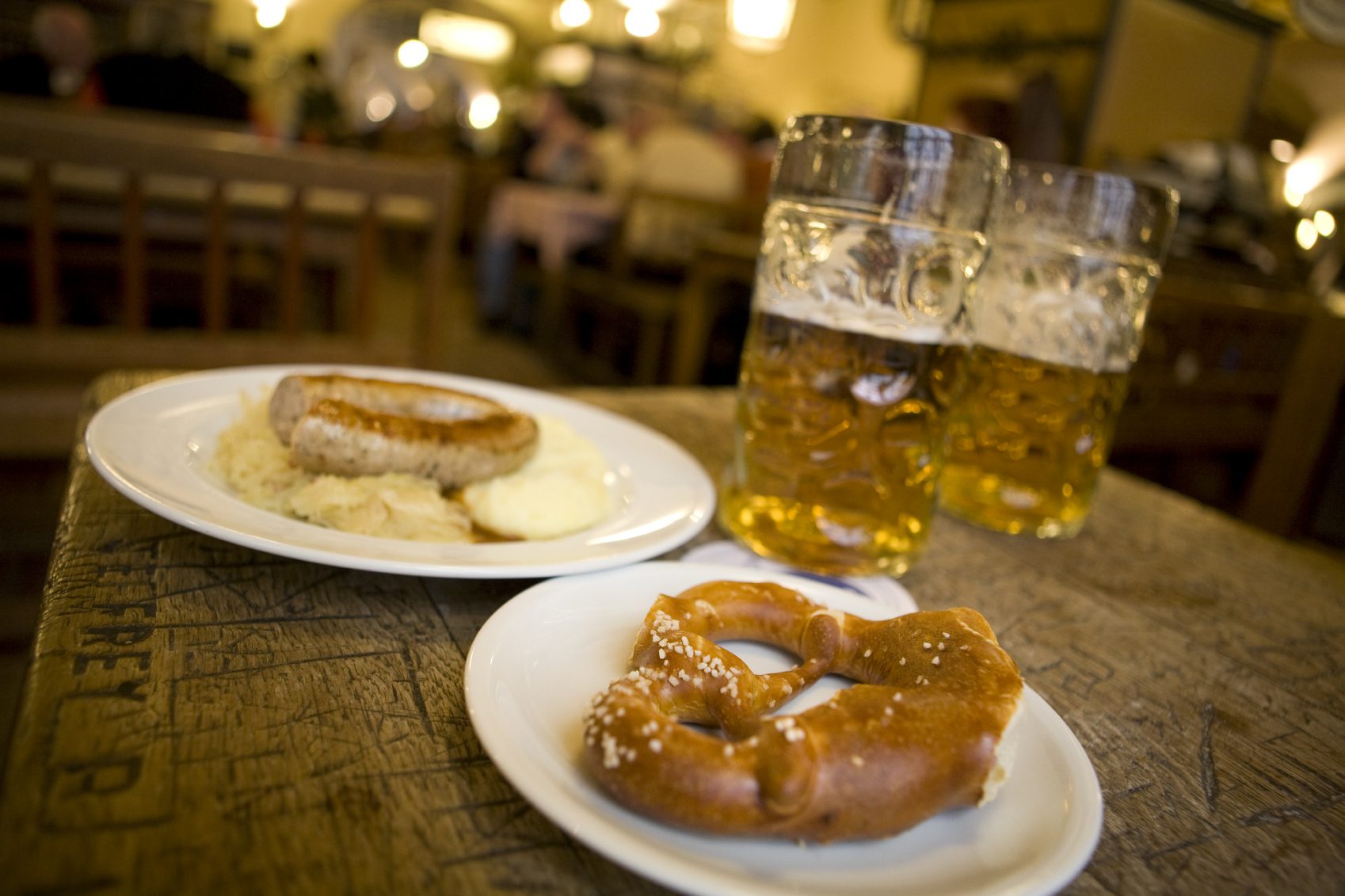 You know, when I think of the word “culture”, a lot of things come to mind… Traditions and customs, languages, music, clothing, history, architecture, the arts. But I must admit: the number one thing that I think of is always FOOD! There are so many delicious, exquisite, to-die-for, unbelievably tasty foods in all of these amazing places you will be visiting in Europe this semester. It’s something to definitely get excited for. Yes, you can learn a lot about a city by visiting the museums, speaking with the locals, and checking out the historic sites, but you can also learn from sitting in a restaurant, visiting a roadside food stand, posting up in a cafe, and shopping in the markets. You aren’t allowed to leave Europe without tasting:

I know what you’re thinking. Pork Knuckle? Are you sick? But trust me! This Bavarian dish will make you weak in the knees. Like, falling-off-your-chair-good. I first tried it at Munich’s Oktoberfest and I plan on eating it at least once a day during my time at Springfest this April & May. Get a little side of potato dumplings & red cabbage and you won’t be able to stop smiling for hours (especially with a big stein of bier to wash it down). Austin, the Bus2alps Rome master, says the best place to get some schweinshaxe is at the Chinese Tower on Munich’s famous bike tour.

When I first visited France, I was sure nobody would be able to convince me to eat a SNAIL. I was pretty set with that. However, I had a realization that I was in France. Like, the country France. And I wasn’t sure if I would ever be back again. So I decided to take advantage of my opportunity at hand. I mentally prepared myself, took a deep breath, and ate it. And my life has never been the same. Baked in garlic, butter, and herbs, escargot is absolutely scrumptious. I eat it every time I’m in France now. I recommend eating some up in Montemartre amongst the Sacre Coure, overlooking the city. And then get a big nutella & almond crêpe for dessert. Crêpes in Paris are so legit & it’s socially acceptable to eat more than one a day, so don’t worry.

3. Fried cheese and beer in Prague

Yes. You heard me. I said fried cheese. It’s called Smazný sýr (a.k.a. Smaz). You’ll see these cheese stands outside some of the big nightclubs, waiting for everyone to stumble off the dance floor and into the arms of the Cheese Man. A lot of Czech food is focused around tasting good with beer, or tasting good after being drunk off beer. They take their beer verrrry seriously (they claim to have invented it!) Whether this is true or not, I don’t know for sure. But I DO know that it’s seriously delicious, strong, and cheap 🙂

Goulash originates in Hungary, so this is THE place to eat it. It’s a soup or stew of meat, noodles, spices, potatos, and other vegetables. Suuuuper hearty & tasty!  A great plate to get your energy back after swimming in the thermal pools, and spelunking like Batman.

Hot pork sausage, usually sliced up and served with warm curry ketchup..You can find it at lots of food stands throughout the city, usually mit pommes (with french fries). It’s the perfect snack to grab on your way to the East Side Gallery or the TV Tower. Cheap and delicious. Just the way I like it…uhhh..yeah..moving on…

The fresh fish from Split is nothing to joke about. It’s fresh ta deaf. It will flake right off the bone & melt in your mouth. And you might not know that Croatia is actually very much into their wine. Team Barcelona’s travel specialist, Tara says it’s a perfect meal to enjoy after a day of island hopping or playing in the Krka Waterfalls. You know, the usual.

hahaha let’s face it, no matter what it is, you’re gonna think it’s the best tasting thing in the world. My recommendations after the coffee shops? Nachos, pancakes, or maybe even nachos inside pancakes. Seriously, just eat anything.

The Swiss are known for their cheese fondue, so take part in the tradition! Gather around the table with friends, potatoes, and bread. Light the flame and dip into the warmed, Swiss cheese goodness. Hint: You’re supposed to scrape the bottom of the pan each time you dip, or else the cheese at the bottom will burn. But that’s actually the best part, so snag it before someone else does! Also, Rösti is a must-have in Switzerland…made of grated potato, either cooked or raw, and fried into round patties. Sometimes, other ingredients are added, such as bacon, cheese, onion, apple, or herbs. Knock both off the list by going Night Sledding–it’s included in the package & it’s the best meal to have while warming up in the lodge.

So get out there. Start traveling and enjoy the food! Your Bus2alps guides know all of the best places to get delicious, affordable eats, so don’t hesitate to ask for some recommendations. Be brave & step out of your comfort zone to try new things. You just might love it.