Ireland was such an amazing place to go. Seriously, I want to move there. Everyone, and I mean everyone, was so unbelievably nice.. it was kind of like being in the South again (no offense to all my Northern friends). Quite a nice change from how rude some of the Romans can be at times.

Probably the main reason Ireland was so great is because I had to plan absolutely none of it  thanks to Bus2Alps! My friend Julia and I booked it as a last minute trip to get away from the bizarre snow in Rome and it couldn’t have been any easier. All we had to do was find a cheap flight, courtesy of the oh so lovely Ryan Air and hop on. Friday morning we had a tour of the City of Dublin through New Europe Tours which is a company Bus2Alps uses on the majority of their trips. Robbie was our tour guide and he was seriously the best tour guide I think I’ve ever had.. and after being here for two months, I’ve had a lot. He showed us different churches, the Dublin Castle, Dubh Linn gardens, medieval walls, Vicking remains, ha-penny bridge and my favorite, Trinity College. Mainly my favorite because Robbie did a great job and sold me on Ireland and now I want to move there for my MBA. They have a bell tower in the middle of the campus and rumor has it if you walk underneath it and the bells rings, you’re a virgin. Needless to say, not a soul walked underneath that bell tower. The library at Trinity was used in Harry Potter.. so you know I was beyond obsessed.. I would just go there to pretend I was studying at Hogwarts (nerdy I know). On the tour Julia and I had our first ever Irish coffees, so yummy and just what we needed on a chilly morning!

That afternoon our Bus2Alps leader, Lauren, took us to the Guinness Storehouse and we toured the brewery. By the way guys, if you haven’t had Guinness.. you should try it-you’ll never drink cheap beer again! The brewery was seven floors and described all the processes in making the beer and on the top floor they have the Gravity bar where you can see all of Dublin. It’s a pretty neat view, something I would definitely check out if you get the chance to travel there. That night we went out on the pub crawl. We started at like 4 pubs and eventually we got to O’neills where we ended up staying instead of continuing on the tour because they had an awesome band called the Galway Guards. Of course all of us Bus2Alp-ers (yep, I just created a new word) became friends with the band and hung out with them afterwards. The guy in the band who made all the crazy girls from England move because they kept hitting me while they were attempting to dance, gave me one of their cds.

Saturday we took a day trip to the Cliffs of Moher and Galway. The cliffs are absolutely breathtaking. I also have never experience such a difference in weather in such a short amount of time. It was beautiful and sunny, then ridiculously windy and then we got hailed on.. all within two hours. The pictures describe it better than I can:

Then we went to Galway and walked around. It’s a cute little city and has really nice people. I bought my claddagh ring there. It’s a ring that the Irish wear that can either symbolize you’re taken or that you’re single depending upon which way you turn the heart. Us Americans can’t figure out which way to turn ours.. too many complicated relationships? 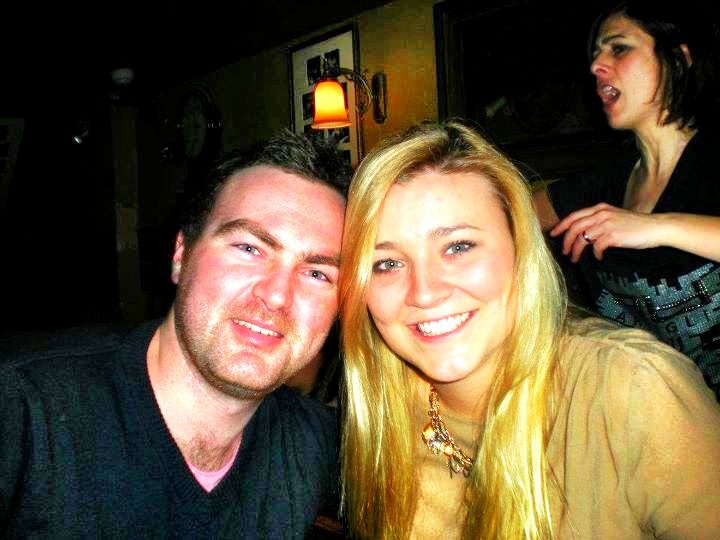 After we got back to Dublin, Julia and I went out with Lewis, a friend from home, for a few drinks. He showed us around to some of his favorite pubs in Dublin, they were pretty neat. It was SO nice being able to see Lew after not seeing him since summer. So we caught up on everyone we know and just talked about life and whatnot.

Then Lewis had to go home cause he had work in the AM so Julia and I ventured around Dublin by ourselves hopping in and out of different pubs that our Bus2Alps guide recommended for us to go to. It was so nice to have her as a reference since she’s traveled there so many times, she really knew her stuff!

Overall Ireland was great, It made me really excited to go on my next Bus2Alps trip-Island hopping for Spring Break in Greece! If any of you don’t have spring break plans yet, you should definitely hop on that trip. They plan everything for you and include all the best attractions in your destination, so you basically don’t have to do anything but show up, how nice is that? I’m probably looking forward to the booze cruise the most-lovely beaches and cliff jumping while sipping on Greek beer… but then again there’s biking around the beautiful Island of Santorini.. who wouldn’t want that?

This is an entry for our Spring 2012 Why We Ride Blog Contest. Click here to read the original blog post on Erin’s blog, “Roaming around Rome”, as well as her other adventures while studying abroad.