This is an entry for our Spring 2012 Why We Ride Blog Contest. Click here to read the original blog post on Meghan’s blog “La Bella Vita in Italia”, as well as her other adventures while studying abroad.

This past weekend I went to Interlaken, Switzerland with a group of friends.  We went with a group called Bus2Alps, which is a tour group that plans trips all around Europe for study abroad students.  They are such and amazing group and the best thing is, you don’t have to think all weekend and just get to enjoy the trip.  They get you everywhere and know all the destinations so well that they take you to things you would have never known to go see beforehand or had a way to get there.

On Thursday night, we all met up at the train station to catch the bus.  The bus was really nice and there was a good amount of foot room.  The drive there was about 8 hours.  They plated a couple of movies, but I quickly fell for a couple of hours once we got back on the bus.  We arrived to Interlaken around 3:30am and were dropped off right in front of our hostel. We stayed at Balmer’s.  There were 10 of total (5 girls and 5 boys) in our room.  We had beautiful views from our windows and it felt like a real cabin in Switzerland.
After a couple hours of sleep, we went to get our free breakfast.  It wasn’t anything special, but was free so we made sure to make it down.  Then it was time for skydiving!
We skydived at Scenic Air-Skydive Switzerland.  After the four of us signed our lives away, we got suited up.  There were three planes and we were on the last one.  The plane ride up was about 15 minutes and the views were just incredible.  For miles, all you could see is snow covered mountains.  After getting attached to my guide, the door opened and it was time to jump.  I wasn’t nervous the entire time, except when I was hanging outside the plane 13,000 feet up!  I asked to do a backflip out of the plane.  The adrenaline was insane and I couldn’t believe I was free falling 120 mph from the sky!  Once my parachute opened, he started doing turns and cartwheeling us through the sky.  My landing was far from perfect, but I was alive and still shaking from the rush.  It took me several minutes just to be able to stand up straight.  I called my mom to tell her happy birthday and reassure her I was safe.  It was by far the BEST thing I have ever done and am definitely addicted to it now. 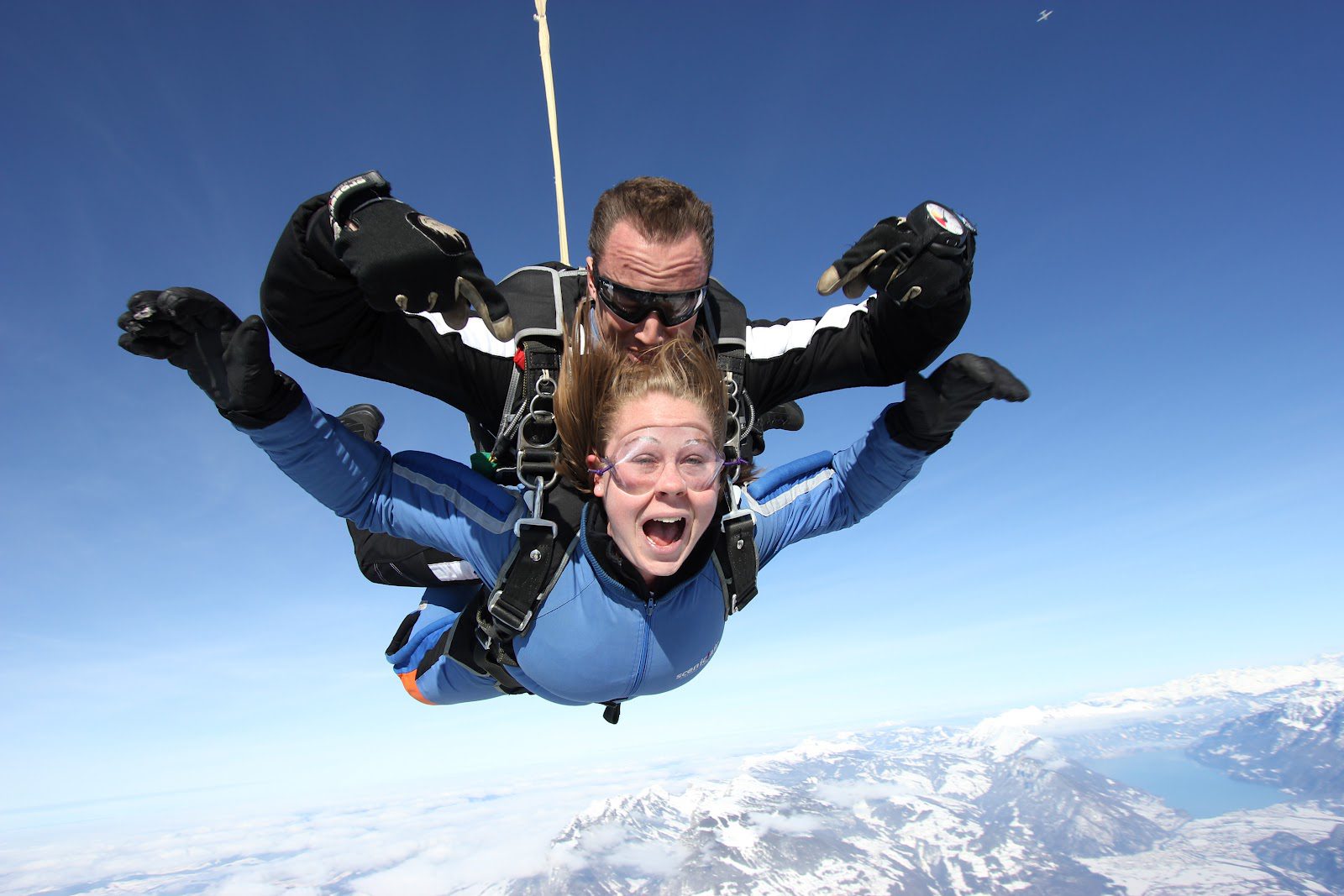 Then we met up with the rest of our group in the hostel.  Happy Hour just started, so it was 2-for-1 beers.  i had a beer called Rugenbrau, which was a local beer brewed right down the street.  We sat downstairs, just talking and reflecting on what an amazing day all of us had had.  We must have said “This is the best day of my life” a good several hundred times.
On Saturday, we spent the day walking around, exploring and relaxing in Switzerland.  While walking, we found our Bus2Alps leader (Alex) and he told us he was going to see the view of the lakes.  As with everything else I had been experiencing that weekend, saying that the views of the lake were incredible, was quite an understatement.  It was stunningly beautiful and unlike anything I had seen before.  You can’t help but just stare and want to pinch yourself and wake yourself up from this incredible dream.  It’s almost not possible to be able to take it all in. 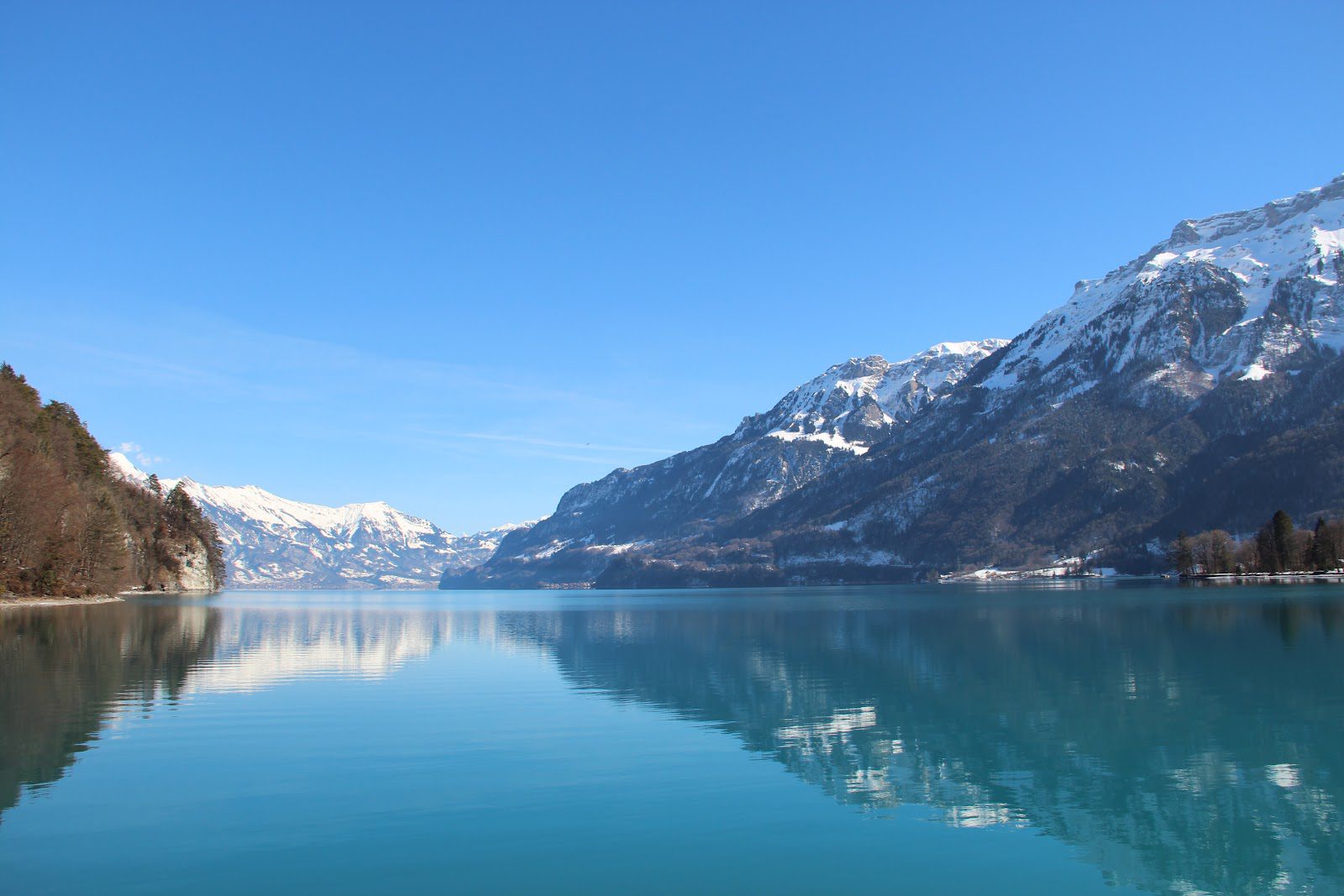 We stopped for lunch and I had a rosti, which is just shredded hash browns cooked in a skillet.  However, mine was covered in delicious Swiss cheese, cubed bacon and grilled onions.  It was one of the best meals I have ever had, along with the most incredible view that exists in the world.  That evening, we went to a chocolate show and tasting.  Tasting it was by far my favorite part. I think we all ate our weight in chocolate.  They had trays of chocolate of all kinds, and we were just allowed to eat whatever we wanted.  Talk about kid in a candy store. 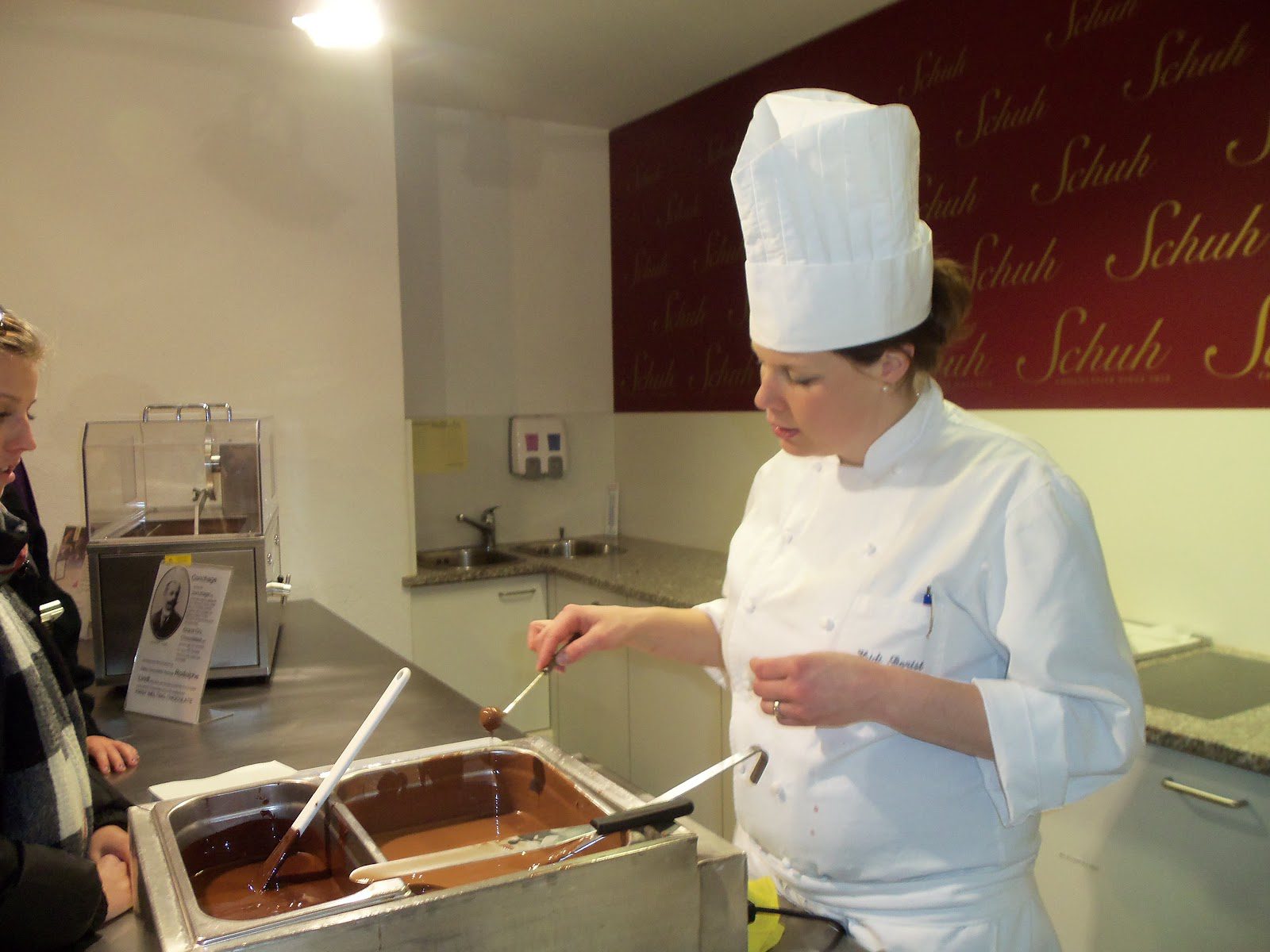 Then it came time for our second adventure.  Night sledding.  It was incredibly fun and amazing!  You get this metal sled without any type of steering mechanism.  To “steer”, just put one of your feet in the snow (this didn’t really work for me; I just hoped for the best when passing people).  We all had to wear these blinking red lights on our backs so we wouldn’t run into each other.  You basically are told to you follow the white and if it isn’t white, it’s off the side of the cliff or a tree.  Awesome.  It took about an hour to get all the way down the mountain.  There were times when nobody was in front of me for several seconds and all I could do was hope that I was still on the right track.  I took some time and ate snow.  How many people can say they ate snow off a SWISS MOUNTAIN?! 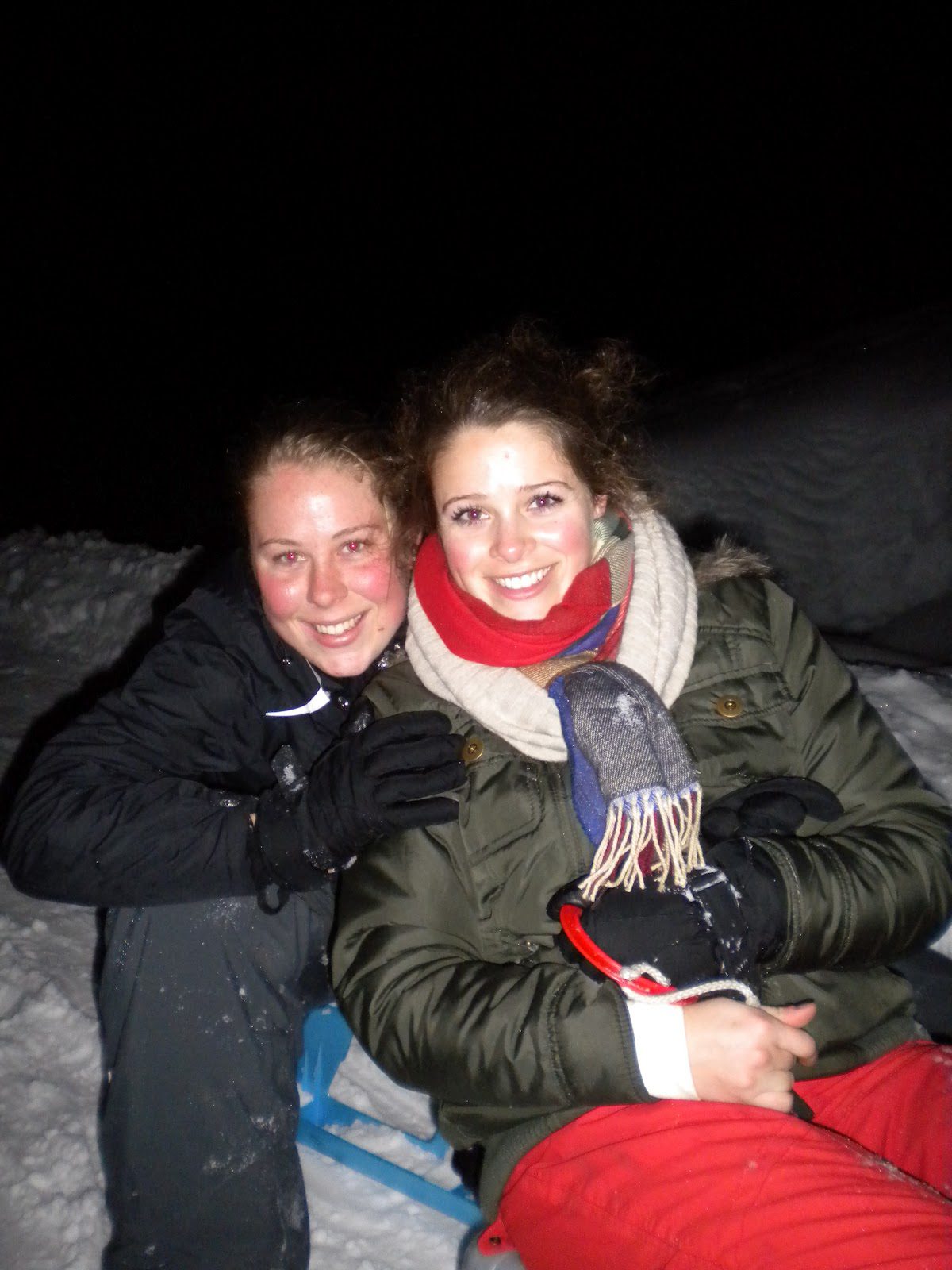 The best part was the views.  The night was so crisp and clear without a cloud in the sky.  You could literally see EVERY single star.  The stars gave the sky just enough light, that you could see the tips of the snow covered mountain tops in the background.  It was so faint, that a camera couldn’t even capture it.  The night ended with a fondue dinner that was included with the night sledding.  We got a pitcher of beer, salad, pork, rosti and cheese fondue.
Before leaving on Sunday, we went to this awesome place, where the lady had bagels overnighted for New York.  I finally got to have an American bagel!
I cannot wait to go back to Switzerland.  It has part of my heart now…

What to look for in medicines online? Typically the drugs you searched for can more than one listing. Many listings, which are compiled by generic name indicate a physic is accessible in more than one dose or in varied forms, such as liquid. You can purchase physic to treat chronic treatment of the signs of osteoarthritis or lower back pain. Viagra which is used to treat impotency and similar states when hard-on is of low quality. Viagra is a remedy used to treat few upsets. What do you already know about cheap cialis 20mg online? What is the most great information you must discuss with you doctor about ? Other question we must is . Presently more than quoter of men aged 40 to 70 reported some degree of erectile difficulties. Certain far-famed medications can mean screwing with your sex drive. Commonly the treatment options may include sexual disfunction drugs or hormone treatments. Do not use any medication without telling your physician if you going to get pregnant during treatment.