This week’s Bus2alps featured blogger is Katherine Moran whose blog “Katherine Around the World” highighted this experience with Bus2alps in Munich titled “Blondes, Braids, and Bus2alps.” The entry has had some photos and contents removed. To check out the entry in its entirety, and read up on other experiences Katherine has had studying abroad, check out her blog here.

Thursday afternoon my friend Megan Bolan (from USD) flew all the way from Ireland, where she is studying abroad, to embark with Lindsay, Kaitlin, and me to Munich for Oktoberfest. We left at midnight with Bus2Alps for the 9 hour drive. I liked leaving that late because I slept the whole time and was ready to go when we got to Germany in the morning. We camped for the weekend, which was bittersweet… Being from California, I have never slept outside in temperatures under 70 degrees (after the first night I learned how many layers were needed). The campsite had lots of cool Aussies who ran “Stoketoberfest” who we also got a few perks from… including breakfast and unlimited beer and sangria for 5 euro… What more could a college kid want?

When we first got to the campsite, we took a scenic 6 hour bike tour of Munich where we made a ton of amazing/historical stops… 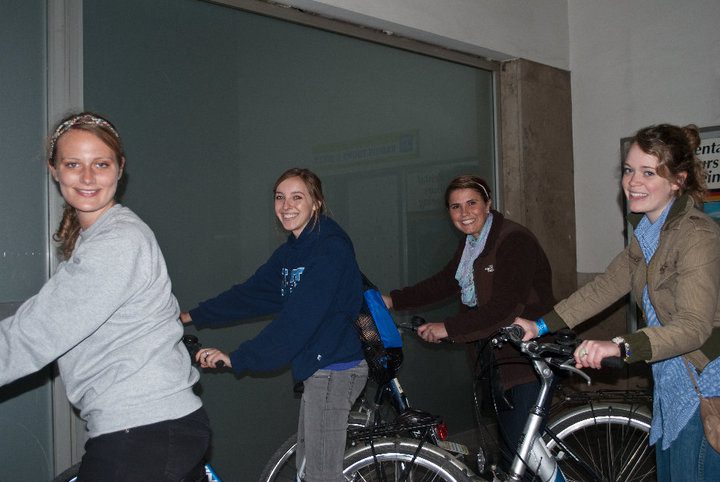 First stop: Theatinekirsche. Our witty bike tour guide told us that we could remember the name by “Tina Turner”, hehe. This church was built by the royal family because the king and queen had six daughters and needed a son, the king prayed that if he had a son, he would show his gratitude by building the most beautiful church. Hence, he had a son and began building this-
which of course carried into the next generation.

3. We then rode through an English Garden and rode all around the park, ending up in a Bier Garten for some snackies.

After all that riding, we needed some snacks…

Kaitlin and I shared this! We had sausage, country potatoes, and shared a weissbier. Yummm. Trying to gain my adult taste buds by drinking beer. All this for 10 Euro! I love massive pretzels, they are so much cooler than average sized pretzels… I don’t know why, we Americans love to supersize!

3. Surfers in Munich?
Saw something I will probably never see again…. surfing in a river. It’s like those fake waves that you can ride at water parks for $5 extra. One kid would hop in the river and surf till he or the one girl fell. Then another kid would jump in. It was really fun to watch. They must have been freezing! 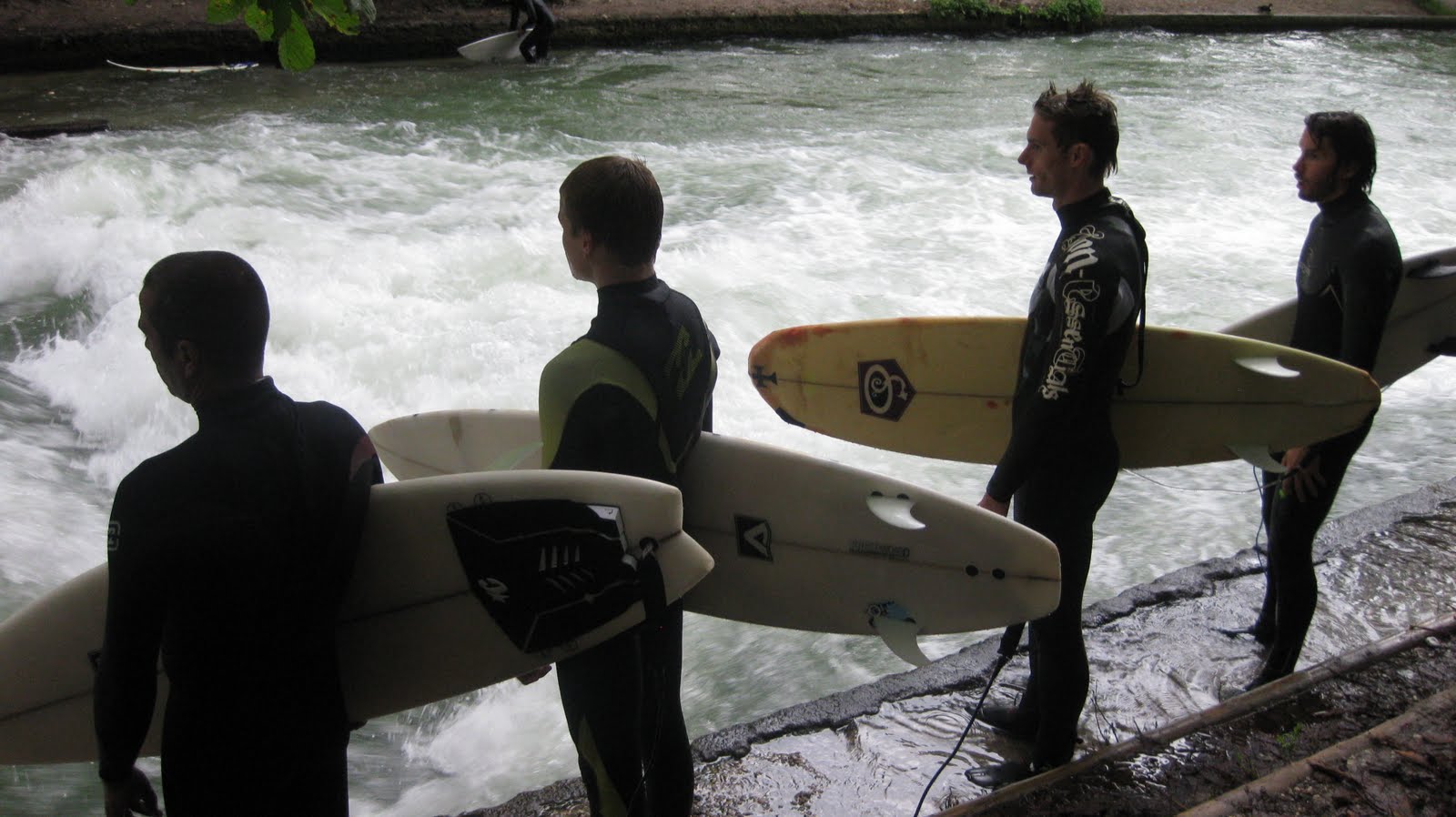 3. Reasons Why I love the world’s largest carnival….
1.Beer and Schnitzel Galore!!!

We went to the Hofbrauhaus. Our Bus2Alps tour guides took us there because they knew it would be the easiest tent for us to get beer. Thanks for the tip Joey! There were so many people inside but we wanted to make sure we got a table because you can’t be served standing up. So we ran outside and snagged a seat quickly. We were lucky and got a table by the parade!

A few minutes after they opened, we got served.

A full liter of beer!

Prost! Look each other in the eyes, or you will have bad sex for seven years? . . . crazy Germans.
Lindsay and I got weisswurst with sempf for 1 euro….My German friend Luisa says that it’s brain, Wikipedia says it’s finely minced veil…. but it looks like brain. Idk what to believe… But I also got my favorite, SCHNITZEL!!!!! I love me some crusty German bread.

I wish we had a pretzel castle back at home!

Sooo many dirndls on so many different aged people… from the babies to the grandmas. And I’m surprised so many boys wore lederhosen, even teenagers. Wish I brought my dirndl, then again I might have froze in place…

Lots of Hansies and Heidis….I love, love, love how all around the world, whenever locals see tourists taking pictures, they give the peace sign.

Megan and I shared this little tent, conveniently located next to Kaitlin and Lindsay. We didn’t do much sleeping because the campsite was a party in itself every night. Such a deal with breakfast and unlimited wine and beer for 5 euro. The sangria was delish. I’m beginning to memorize every beat to “Papa Americano”. One of the leaders, Joey told us about all the trips he’s been on and the different options Bus2Alps has, so now Kaitlin, Megan, Lindsay and I have the travel bug. Yay for my diminishing bank account!

Kaitlin, Lindsay, Megan, and I all went on the ferris wheel. We loved sitting in our cute little German gingerbread houses. Germans aren’t cheap, we got a lot for our money with this in that the wheel went around 6 times. Before coming to Oktoberfest, I didn’t know how big the carnival actually was. It’s massive.

Lindsay and I went on “Play Ball”…. more like “Puke Ball”. These buggies would spin in the opposite the direction of the spinning platform. Then the whole platform reversed. We were going sooo fast and screaming “Oktoberfest” the whole time. Good thing we only had a little bit of schnitzel before we rode. Barffff.

Ready for the long drive back to Florence… at least we have the countryside in Bavaria to look at, reclinable seats, and multiple movies to watch! Thank you Bus2Alps for planning this inexpensive 4 day trip for us, including some transportation and fun activities, without us having to lift a finger… Now back to my rough three day school week..

Also check out these blogs about Oktoberfest with Bus2alps:
Justin Kuntz’s “European Blog of Blogs:
Taylor Wilson’s “how to survive in italy when you can’t eat pasta”

What to look for in medicines online? Typically the drugs you searched for can more than one listing. Many listings, which are compiled by generic name indicate a medicine is accessible in more than one dose or in varied forms, such as liquid. You can purchase medicine to treat chronic treatment of the signs of osteoarthritis or lower back pain. Viagra which is used to treat impotence and similar states when erection is of low quality. Viagra is a remedy used to treat few upsets. What do you already know about cheap cialis 20mg online? What is the most considerable information you must discuss with you doctor about ? Other question we must is . Presently more than quoter of men aged 40 to 70 reported some degree of erectile difficulties. Certain far-famed medications can mean screwing with your sex drive. Commonly the treatment options may turn on sexual dysfunction drugs or hormone treatments. Do not use any treatment without telling your physician if you going to become pregnant during treatment.