Originally posted on Not A Tourist: Adventures Abroad by Abby Hammack

Other titles for this post: 10 Things That Make Me An Idiot, 10 Ways You Can Make Fun of Me, 10 Reasons To Laugh, 10 Things To Learn Because I Know You’re An Idiot Too, OKAY?

1. The cars are tiny

Now this is something I knew, but when I imagined tiny, It was a Fiat. But let me show you the smallest car I’ve seen here and also in my entire life ever. 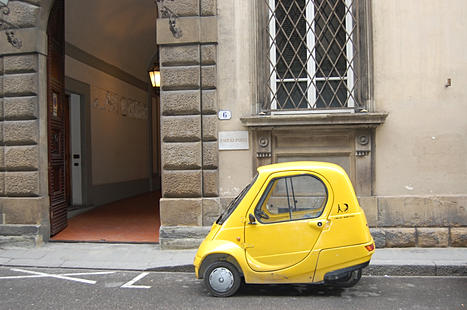 Look at that! LOOK AT IT!

Granted, that’s a big doorway, but that is the smallest car you will ever see. HOW DOES ANYONE EVEN FIT IN THAT? I should’ve stuck around to watch someone get in. I look for it everyday. I’ve started writing a mystery novel on the subject.

2. 1 and 2 Euros an everything smaller is always a coin

I also knew that was a thing, but I didn’t know it was always. I thought it was an option. It’s not. And it’s kind of annoying. Lots of coins. Lots of forgetting you have more money.

This is not a joke that I didn’t know this. I don’t know if you do? But none of us did. It took us like 4 days to understand this. Literally all we had to do was look at the coins. For example:

I love exploring the city, but at the end of the day and also between classes, everyone loves a good binge-watch. Everyone in the house started watching Vampire Diaries from the beginning and it’s quite the addiction. I’m not saying it’s a good one, but it’s happening. The only downfall is that our wifi sucks and sometimes it doesn’t work and the worst thing that can happen is LOSING NETFLIX DON’T MESS WITH MY NETFLIX JUST DON’T.

5. There paper is a different size

And here’s a tiny diagram to prove it.

Fine I’ll say it, this was super surprising and I had no idea it was a thing at all.

THIS IS HORRIBLE.  Nothing says, “I’m AMERICAN!” like running into a door because you dont know which way it opens. Not to mention, this is quite the fire hazard. Does no one outside the U.S. panic? EVERYONE PANICS. EVERYONE!

Also, shout out to that IT Crowd GIF because British comedy.

7. You’re expected to eat at 8pm but you still get hungry at 4 becuase you’re American and you once lived in a sorority house.

And then all you can think about is that pizza you ate at Gusta Pizza, it was Margherita you loved that, it was so good, the crust was perfect, those guys shaped it like a heart, that was so sweet, it was only 5 Euro, maybe I should go back, the basil was so good, wow pizza.

Winter has already come, and is in fact going, but it’s still cold here. When the sun shines I practically jump up and down and roll around on the ground soaking it up. The problem is our little tiny streets and alleys don’t allow the sun to shine in them, making them perpetually cold, even when it’s almost 60 degrees.

There is still quite a lot to learn, but I know a lot of these streets like the back of my hand. I know how to avoid the guys who sell selfie sticks (YES FREAKING SELFIE STICKS EVERYWHERE) and how to get the best deals (NOT ON SELFIE STICKS). I know how to go to class and not get lost, and now where to go to take the best photo ever. Look at that view!

10. There are people everywhere

Everywhere you go, there are more people. I guess I should have known that Florence is a very touristy city, but I neglected that a bit. Every weekend there is a new crowd taking selfies in front of Il Duomo and buying gelato.

But even apart from tourists, there are Italians everywhere because everything is so small. The market is really stressful because it’s tiny and Italians don’t have the same sense of personal space as we do. In fact, I would say they have none. I’ve never been so close to people while just standing in a line. That is one thing I do not like. Everyone just bumps around each other and doesn’t apologize. I know we apologize too much, but apparently I just don’t like touching people or being around them in general.

I think we’ve all surprised ourselves with how much we can accomplish and adapt. It’s not always easy, but as I think on the fact that I live in Italy and I’m going to Austria tomorrow, this may be the coolest and most meaningful thing I ever do.

What to look for in medicines online? Typically the drugs you searched for can more than one listing. Many listings, which are compiled by generic name indicate a medicine is accessible in more than one dose or in different forms, such as liquid. You can purchase physic to treat chronic treatment of the signs of osteoarthritis or lower back hurt. Viagra which is used to treat impotence and similar states when hard-on is of low quality. Viagra is a remedy used to treat few upsets. What do you already know about cheap cialis 20mg online? What is the most great information you must discuss with you doctor about ? Other question we should is . Presently more than quoter of men aged 40 to 70 reported some degree of erectile difficulties. Certain far-famed medications can mean screwing with your sex drive. Commonly the treatment options may turn on sexual dysfunction drugs or hormone treatments. Do not use any medication without telling your physician if you going to become pregnant during treatment.